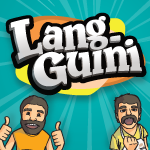 LangGuini is a multi player card game for 3 or more players. The game was designed during the 2011 Global Game Jam in Philadelphia, PA. last year’s theme was “Extinction” so we decided that the English language has been deteriorating rapidly, so we needed some new words. Being big fans of party games we wanted to make a social game,we created LangGuini. After almost a year of play-testing and messing around with the mechanics we really want to print this game and get it out there.
The game was officially funded on Kickstarter on January 16, 2012 thanks to 144 amazing backers. We are currently in production for the first sampling of the game.
For more information on LangGuini please check out the website here.