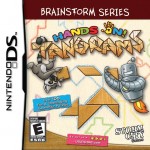 Re Released in 2011 on the eShop and DSiWare.
Released originally  in 2009 for the Nintendo DS, Hands On! Tangrams is a puzzle game aimed at the youth and causal markets. Based on the 18th century Chinese moving tile game, Hands On! Tangrams allows gamers to manipulate geometric shapes to mimic real-life objects.
Published by Storm City Games for the Nintendo DS
70/100 Metacritic.com; 3.5 out of 4 Stars USAToday.com
10 themed levels, 101 pattern puzzles, and 6-8 hours of game play